Working With Your Office Opposite...Without Killing Them 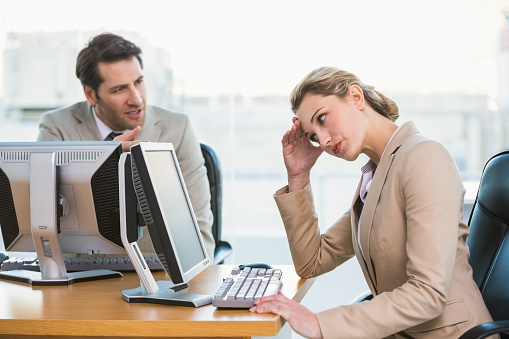 Hmm…a tad extreme, maybe? Ok, maybe a little. After all, you’ve never actually planned out the “accidental” death of a coworker, have you? Neither have I…but anger has definitely risen out of a few frustrating circumstances. In reading “how-to’s” of best ways to deal with frustrating coworkers, I can see I’m not the only one, but most of these self-help articles only suggest ways in which you can make things comfortable enough to work with them in peace….which is a noble goal, don’t get me wrong, but don’t you want to do more than just TOLERATE that person? Don’t you want to work with each of your coworkers in a way that is beneficial to you both AND beneficial to your employer? I know I do!

Now, to be fair, I don’t have a LOT of fellow employees – it’s just George and I most days, but we DO have teammates that we call on for some of our projects (see our team page) and we also work with interns that we hire from AIMS college here in Northern Colorado – some of whom don’t share much in common with us at all, except for their love of video.

For those of you who know me, you know I don’t back down from a confrontation. For those of you who don’t know me, now you know – I don’t back down from a confrontation. I have a very “A” type personality – I’m large and in charge, and I know it. Some would say that makes me a grade A jerk, but that’s only a small part of my personality – I’m also a Jesus freak, a neat freak, a good teacher, a fairly good listener, a positive thinker, detail oriented, easy going, a good public speaker, a good wife and a good mother… and a good friend (I think). But just as we all do, those great character traits, taken too far, can be a negative. If I always think positively, I may not be thinking realistically. If I’m easy going too much of the time, it can easily turn into laziness. Etc, etc…

The man I love and own this business with is almost my complete opposite. That’s where working together gets “interesting”. Because of that, I’d like to talk about a few ways we can do more than just tolerate a person in our lives who seems like our complete opposite: